By Ken Silva pastor-teacher on Jan 4, 2013 in APPRISING MINISTRIES

Apprising Ministries is among those online apologetics and discernment ministries (OADM) who’ve been covering Louie Giglio, Passion 2013, And Jesus Culture this week.
In Jesus Culture—Of Bethel Church—And Practicing Raising The Dead I also reminded you that Jesus Culture (JC) bills itself as not “just a band, but…a ministry of Bethel Church.”1
Why is this important? I’ll tell you; because we have some 60,000 college age youth people who’ve filled the Georgia Dome and now had JC lead them in worship at Louie Giglio’s annual Passion conference.2
In addition these same young people have now seen and heard Southern Baptist quasi-elder Beth Mooreand New Calvinist mentor3 John Piper at this very same event along with JC.
Now, as I pointed out before, I’m not saying that by appearing at Passion 2013 Moore and Piper personally ascribe to all JC and BC is about spiritually. However, their appearance at Passion will have an effect.
There are many of these young people drawn in by the “worship” music of JC who will be under the impression that JC must be okay if Beth Moore and John Piper are at an event where JC leads worship.
So, this is why I’m drilling down on JC, and their spiritual train wreck of a church, where pastor Bill Johnson and his wife pastrix Brenda (Beni) hold court with e.g. BC Associate Pastor and “prophet” Kris Vallotton.
I’ve also clearly documented for you before that BC pastor Bill Johnson aligns himself, and the BC ministry JC, with a wild assortment of spiritual wingnuts like NAR “Apostle” Lou Engle and “respected prophet” Cindy Jacobs.
Consider the speaking lineup for JC’s The Jesus Culture Awakening 2011: 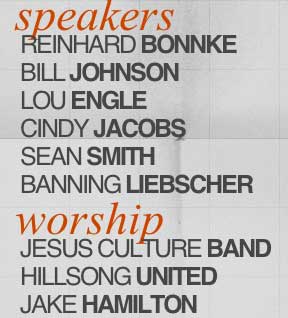 This is not guilt-by-association; this is guilt by endorsement, period. No way around it. It isn’t like I’m saying, for example, that supposed “apostle” Cindy Jacobs once rode by Bill Johnson’s house so they’re “connected.”
Jacobs regularly speaks at JC events. If your spiritual discernment is so far off that you can’t see this woman is absolutely a false prophet, and you think she’s speaking for God, you best question your own relationship to Jesus.
Yet here below you’ll see Banning Liebscher from JC’s Revival Chats with “one of our dear friends,” New Apostolic Reformation apostlette Cindy Jacobs. By the way, Liebsher is: 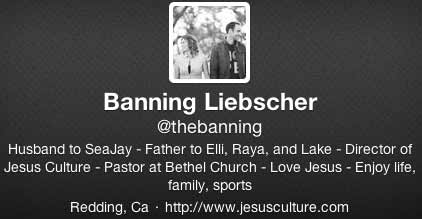 BC pastor Liebscher tells us below that Cindy Jacobs has “become a real mom to our movement” and has “spoken a ton [of prophetic word] into what we’re doing.” It’s important here to note that he calls JC a “movement.”
A movement, I might add, which now has gained increased credibility within mainstream evangelicalism through being featured by Louie Giglio at his Passion 2013 conference. Here’s Liebscher and Jacobs:
00:00
00:00
Now you have another clear depiction of just how extremely off-target the JC Movement is, which extends from Bill johnson’s BC. I’ll leave you now with some of the more notable Friends of bethel from the BC website itself.4
Friends they recommend and link to such as:

Yes, it is this Benny Hinn:
00:00
00:00
If you’re familiar with the Fighting for the Faith program of Chris Rosebrough then you’ll know that he regularly features updates from a spiritual looney tune named Patricia King. Yep, BC considers her as a friend as well:

Here is Patricia King teaching about a “breaker anointing,” where supposedly God makes your faith stronger; but before she can inform us that the breaker anointing is Jesus, she allegedly ah, experiences, er…something:
00:00
00:00
Finally, while there are plenty of other highly questionable friends of Bethel, this one tells you all you need to know about just how far out into spiritual outer space this BC gathering truly is:

You may pick your jaw up off your computer desk now; sadly, it is indeed that Todd Bentley:
00:00
00:00
Just more reasons to be very wary of this Jesus Culture “Movement.” And it looks to me that with Passion 2013 Louie Giglio has now aligned his 268 Generation aka the Passion Movement to the Jesus Culture Movement.5
With this in mind then, let’s think back to another of JC’s mentors, the aforementioned NAR “Apostle” Lou Engle, and what he prophesied6 Jesus Culture will be a part of:

Posted by Followers of Christ at 7:02 PM