Jesus Culture : A Concert of Idolatry 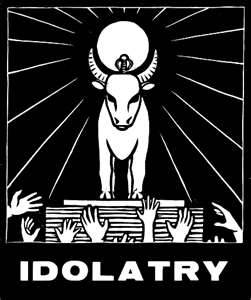 After a strange experience with an erratic Bethel School of Supernatural Ministry student who baby-sat his children, Bart McCurdy of Cottonwood decided to find out for himself what was going on at Bethel.
McCurdy said he attended a Friday night service at the church, during which he saw people painting on stage, dancing and flailing around on the ground. He found their worship music unconventional when one line of the same song was played for at least 11 minutes, he said.
McCurdy said the repetitive music, dancing, painting and excessive stimuli serve to get people worked up into an emotional frenzy where they're expecting to see miraculous things.
"They come looking for that feel-good feeling, that high, for supposed miracles, supposed signs and wonders, speaking in tongues, gold dust, diamonds, feathers. ... It seems like they're just ready for it," he said.
Once, as she ran through her house frantically searching for her journals, the baby sitter told McCurdy the anti-Christ was in her house and Jesus was in hell saving people, he said. Shortly after that, she went into a trancelike state and said she felt 20 feet tall before losing consciousness, he said. The behavior made him believe she was demon-possessed, he said.
McCurdy said he regularly downloads podcasts of Bethel messages and hasn't heard the Christian gospel message taught at Bethel. His Web site, www.heraldingtruth.com, is to educate people on what he believes are false teachings and challenge those involved in the movement, he said.
"I see Bethel and those in this movement as idolaters," he said. "They worship the 'gifts' or the signs and wonders, rather than the creator, or the savior."
Read FULL ARTICLE
Posted by Followers of Christ at 11:40 PM